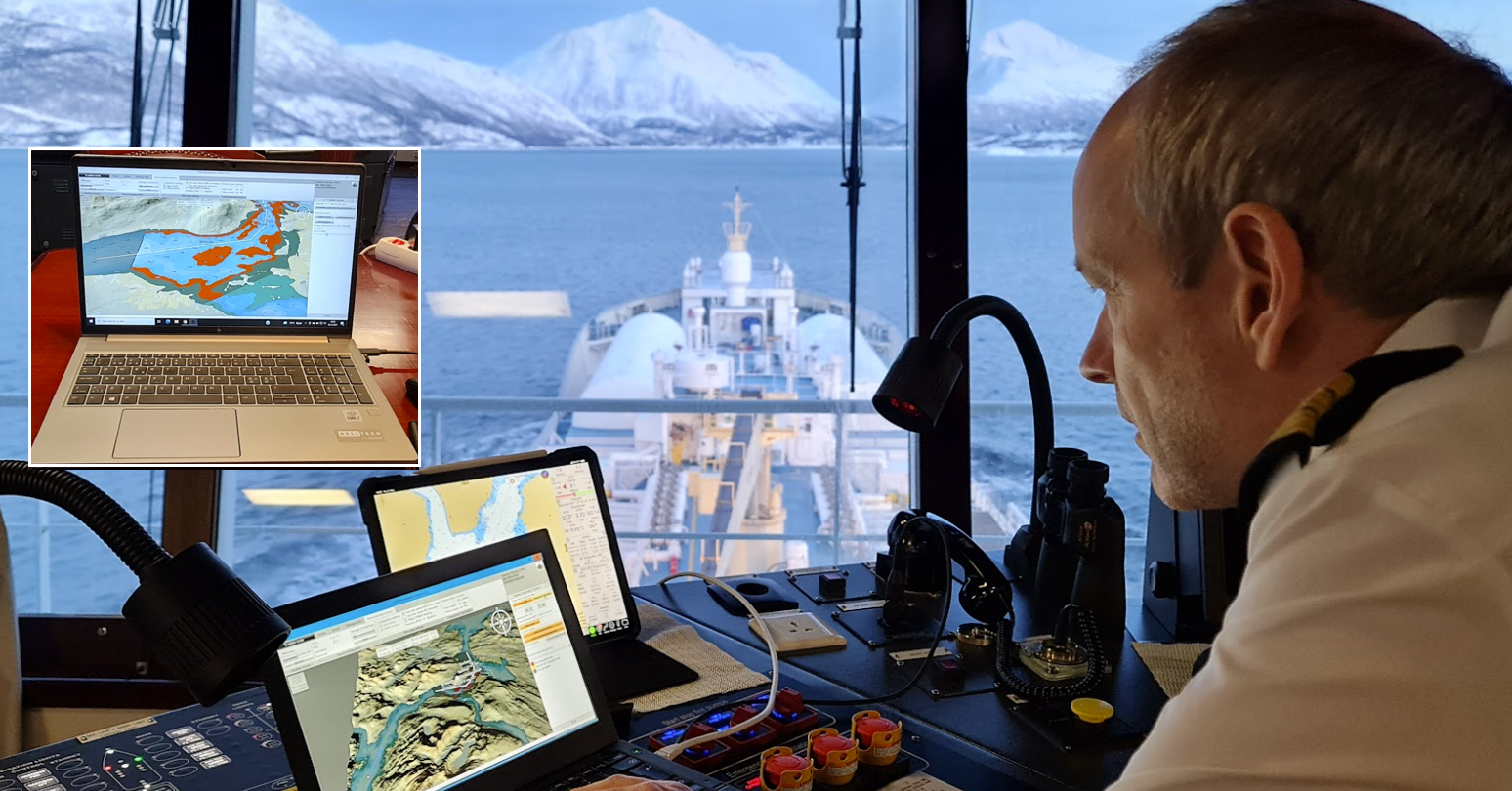 The S-100 Demonstrator project proves in an operational test how new technology can be used in practice, and how implementation and use of S-129 in confined and challenging waters can create added value for the maritime industry.

In a first-time test, pilot Karl Helge Haagensen from The Norwegian Coastal Administration navigated a tanker through the narrow strait of Tjeldsundet, Norway, using the S-129 datasets and the S-100 demonstrator in December 2021.

An experienced mariner, Haagensen knew the strait to be challenging, with shallow waters and strong surface currents. Historically, in traditional navigation, detailed depth information between the depth contours in navigational charts has not been accessible. With the S-100 Demonstrator, all relevant information was presented to Haagensen on one single on-screen map. The S-129 information ensured comprehensive visual control of navigable and non-navigable areas.

The test demonstrated that in addition to safer sailing, the precise information presented to pilots and navigators offers both logistical and commercial advantages.

Haagensen summed up the advantages of S-129 thus:

- We can document safe sailing depths in advance. This means being able to sail as soon as the tide is high enough and saving time by not having to wait for high tide. Ships can be loaded heavier, which means fewer trips, or they can choose shorter new routes and save fuel.

The successful, first-ever test of S-129, also including other S-100 datasets in the Tjeldsundet test showed that the new data types provide safer sailing conditions, especially by the use of S-129 - the new under keel clearance product built on the S-100 Hydrographic Datamodel. The promising outcome demonstrates more efficient sailing routes in terms of economy, safety, and environmental concerns.

The Tjeldsund operational test was hugely important to the S-100 Demonstrator project. The test took place aboard the Tern Ocean vessel, owned and operated by Terntank, which proved to be an ideal vessel for such an endeavor.

The initial goal for the project was to test datasets based on the new standards; S-101, S-102, S-111, and S-129, with a particular focus on the latter. By combining the datasets, we could test and visualize the four S-100 data types simultaneously in one view.

Through the project collaboration with OMC International, we managed to use some of the different S-100 datatypes as input to the S-129 Under Keel Clearance modeling. This is the first time this has ever been done and carried out commercially.

Tjeldsundet was chosen for the test for a number of reasons:
We wanted challenging sailing conditions in confined shallow waters with strong surface currents, where the different S-100 products could be used together in an end-user system to facilitate enhanced voyage planning and voyage execution processes.

It was important that the vessel size and passage through the test area would require pilot assistance, and that experienced mariners such as the pilots were able to provide feedback on the usability of the different S-100 data types.

We wanted to highlight in this test how the new data types, based on these new standards, can expand the navigable maneuver room. This, in turn, could provide both economic, environmental and safety benefits, as it would allow for shorter but still safe sailing routes.

Tjeldsundet is close to the city of Harstad and above the arctic circle. The currents here are strong. The strait is shallow, with the shoalest depths between nine and ten meters in the sailing corridor. This increases the hydrodynamic effect which makes the ship sit lower in the water.

Sailing through Tjeldsundet instead of outside the Lofoten/Vesterålen archipelago gives a reduced sailing distance of 65 nautical miles. Assuming a frequency of five voyages per month, this adds up to almost 4.000 nautical miles saved per year, with the subsequent lowering of fuel costs, emissions, and person-hours.

In addition to this, the extra information served up by the data sets could contribute to a lower number of incidents. Also, a raised awareness of identified challenges will, assumedly, lead to more accurate identification of no-go areas.

The outcome of the test was successful. The S-129 and the other S-100 products visualized in the end-user application S-100 Demonstrator provided valuable information for the end-user, especially for planning purposes. The image below demonstrates the non-navigable (red) and almost non-navigable (yellow) areas provided by the S-129 data. 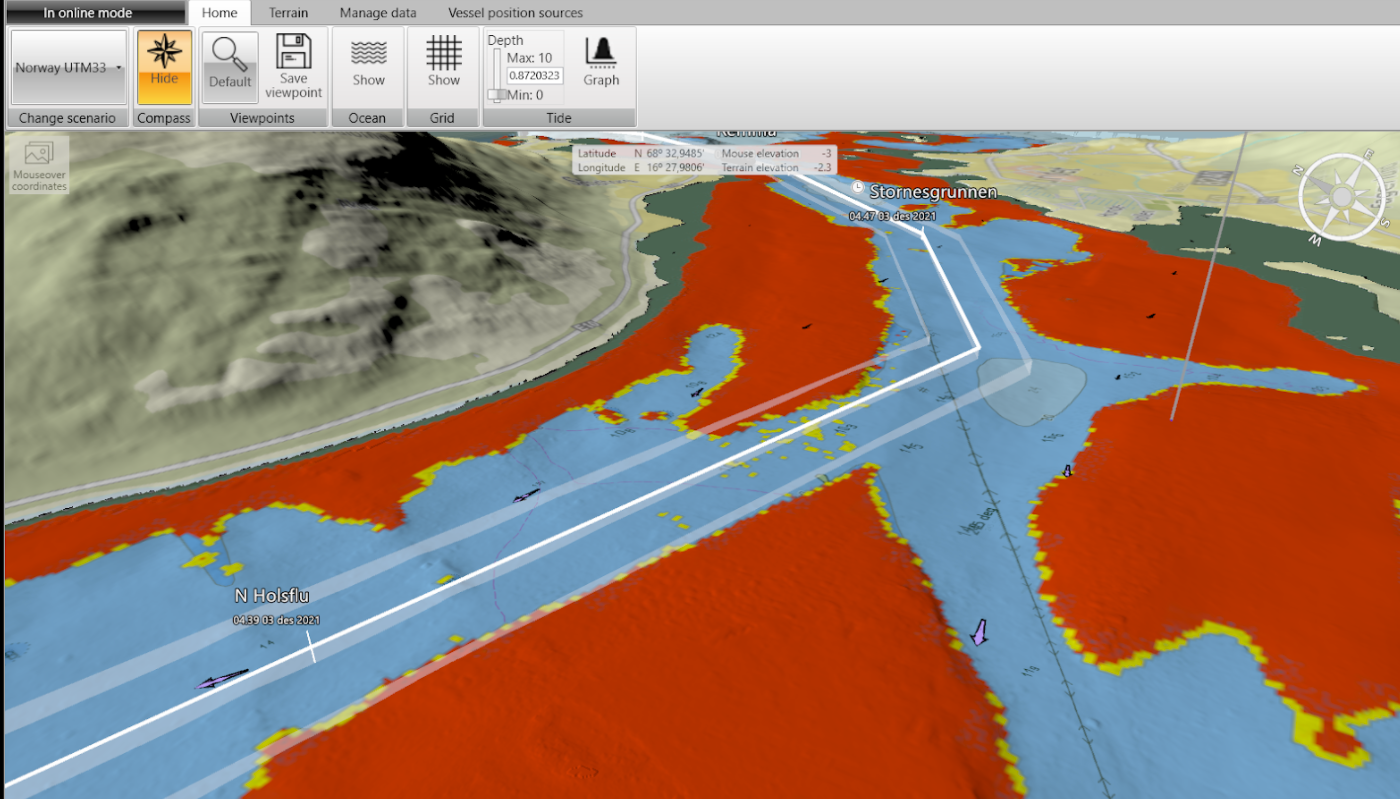 During the live test, the S-129 data was updated with one-minute intervals using 4G connectivity, continuously ensuring precise and updated information in the end-user system onboard.

Advantages demonstrated by the S-129 test

The test voyage demonstrated that the S-129 data set has substantial advantages:

The Tjeldsundet test was very successful. Not only were we able to test the data sets properly, but the data sets also turned out to perform well in challenging conditions and return the desired results.

Svein Skjæveland has worked with electronic navigational charts since 2003 at the Norwegian Hydrographic Service. Since 2006, Skjæveland is employed by the Electronic Chart Centre (ECC), working as Senior Geodata Consultant focusing on ENC validation and quality assurance. He currently holds a position as Manager International Standardization and has been involved in standardization since 2009, attending several IHO working groups.